A new report focusing on frontline workers facing burnout and other challenges encourages the conclusion that digital tools may help mitigate it. The report, published by Microsoft, is based on interviews with more than 9,600 Frontline workers from eight industries and eight countries. Technology is proposed as a solution to help address the problems and burnout affecting frontline workers.

In particular, the report urges business leaders to foster a frontline culture by increasing recognition and communicating clearly as well as properly training employees in new technology.

The pandemic hit frontline workers hard. At first, the audience praised them for their heroism. However, as the epidemic continued into its third year, people became not only complacent, but sometimes hostile towards frontline workers. According to a Microsoft report, more than two billion people make up this frontline workforce, from healthcare workers to grocery store clerks to power grid employees. Historically, the report said, this group is not worthy of technology.

Building a culture of care

Some frontline workers reported increased bonding and communication with co-workers as a result of the shared tension caused by the pandemic, but many said they felt unappreciated, especially by their superiors. Many of them reported a lack of communication that contributed to their burnout. In particular, managers on the front lines said they did not feel like conveying messages from their superiors appropriately and lacked communication. [Click below to enlarge.] 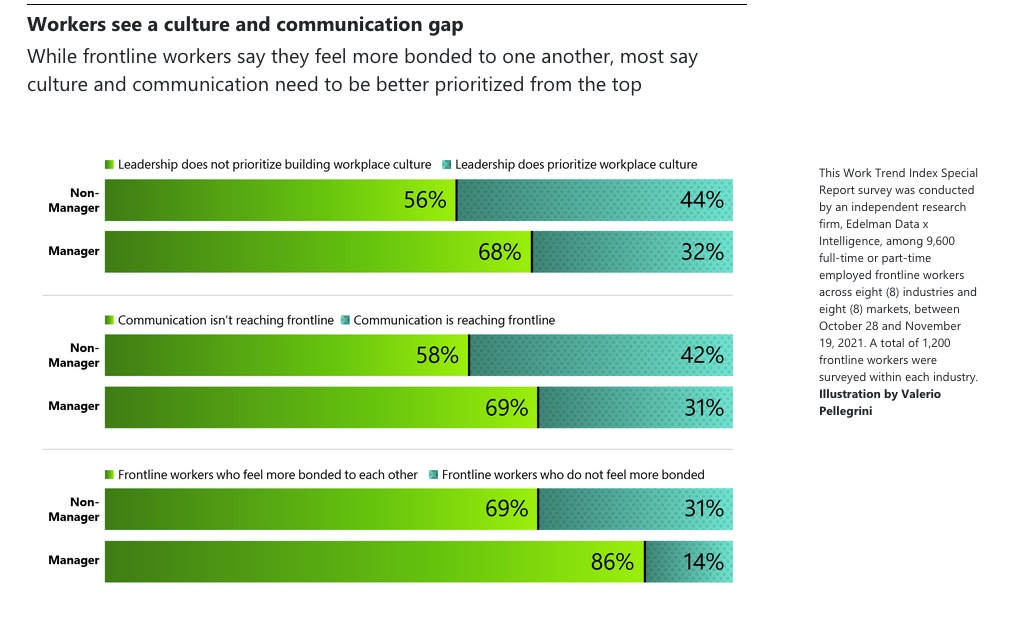 Specifically, the majority (51%) of non-management frontline workers report that they do not feel valued as employees, according to the report. Also, the majority indicated a desire for increased help to address physical exhaustion (60%) as well as mental health (57%).

The turning point has reached the front line

In November, 4.5 million Americans quit their jobs, according to the report. However, most of them did not leave the workforce entirely, instead seeking other jobs. Notably, workers cited the following motivating factors to seek alternative employment, as stated in the report: Desire to improve work-life balance, possibility of raises, salary increases, increased benefits, and additional flexibility in how they work.

“50% of frontline healthcare workers in non-management positions do not feel valued as employees and 57% are excited about the job opportunities that technology offers in their industry,” said David Rayo, chief global medical officer and vice president of healthcare at Microsoft. The first statistic represents an urgent need for healthcare leaders in management positions to take a step back and reassess how they interact with and support frontline workers. The second law highlights that the majority of health care workers on the front lines feel that technology can help address this burnout. In fact, technology has been rated higher for mental health benefits as a potential way to relieve work-related stress. Although technology will not solve all of the challenges facing health care workers on the front lines today, it can help alleviate some of the major stressors facing frontline workers today and help management understand if and when to intervene. “

Technology has played an increasing role in many companies during the pandemic. Historically, some workers were concerned that technology would render their jobs obsolete, the report said. However, 63% now report being excited about the job opportunities created by technology, according to the report. In fact, better technology ranked third after a wage increase and paid time off among the list of things that can reduce stress. [Click below to enlarge.] 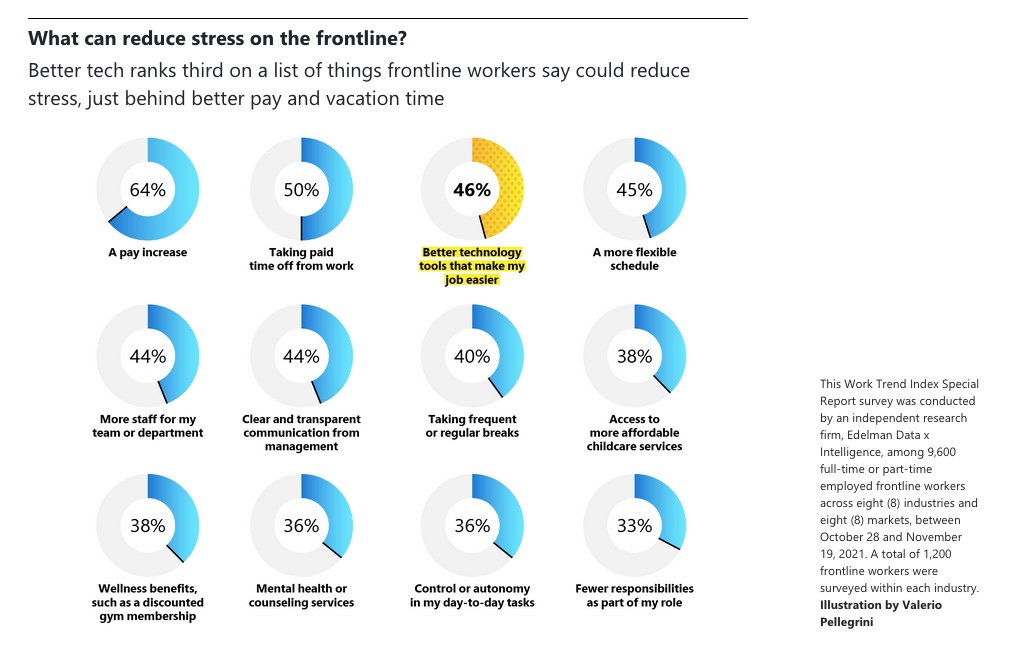 During the pandemic, many companies have implemented additional technology, from increases in telehealth options for patients to virtual meeting platforms for management to video calls to troubleshoot problems on factory floors. The report said that use of Microsoft Teams – which is similar to Google Meet or Zoom Z – alone saw a monthly increase of 400% in total on the front lines from March 2020 to November 2021.

This gap in the application of technology and the training of employees to use it was not specific to one field. The report found this problem in industries ranging from transportation to healthcare to hospitality.

However, the report noted a gap by age of affected employees. Specifically, workers 41 and older reported difficulty adjusting to new technology. The report said workers under the age of 41 expressed frustration with the lack of technology. [Click below to enlarge.] 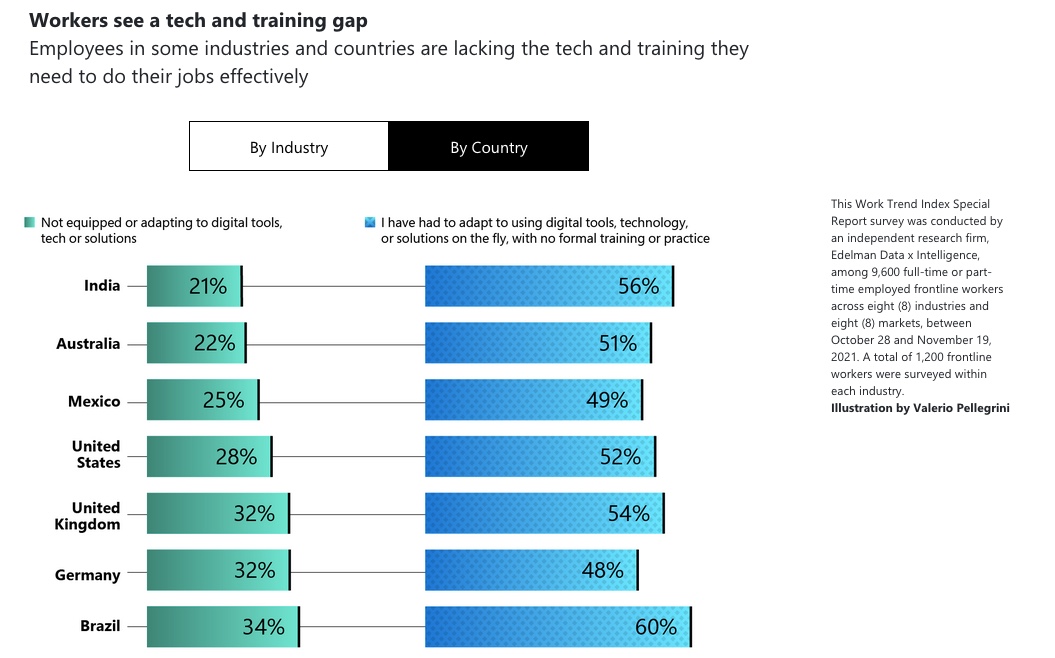 As a result of their findings, the report made several recommendations for business leaders moving forward. First, the report recommended companies implement clearer communication, two ideal ways to help leadership understand the frontline workers released and to appropriately acknowledge their hard work. Second, the application and training of employees in the appropriate technical tools to relieve the daily burdens that technology can handle. Finally, the report recommends making training a priority to ensure that everyone understands how to maximize the technology available.